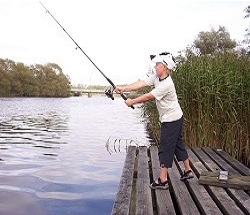 Pike Perch is the speciallity of the lake. The best fishing is where Svartån (Black River) enters into the lake from April till mid June. Fishing from boats as well during summer.
Max weights up to 12 kg !!

European Perch is easiest to catch in the south part of the lake in a deep of 1-2 meters.The perch of 2 kg has been catched.

Northern Pikes of 5-10 kg is not unusual as there is a lot of food for them in the lake. Easiest catched in the deeper part of the lake from boats. Big Pikes catches Carp Breams of more than 1 kg, use big baits !!

Very easy to catch fish with ordinary angling during May and June. Mostly Perch, Roach, and Carp Breams

Later in the summer the best fishing is where the river Svartån enters the lake and in the deaper parts from boats.
Blogg